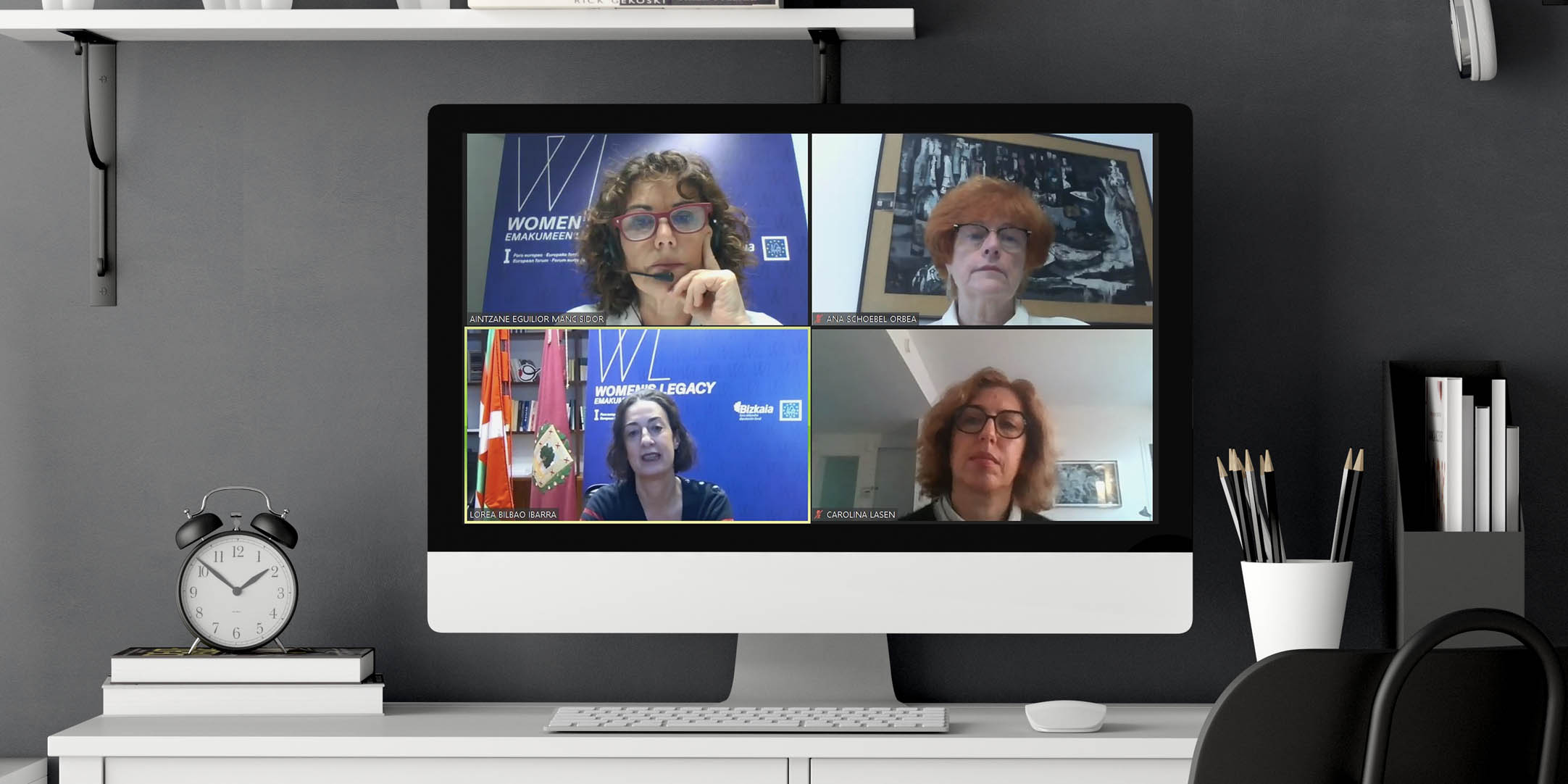 The Women’s Legacy Europe project arose from the European Heritage Days 2018 campaign: Emakumeen Emaria, (which means “Women’s Legacy” in Basque language). The success of the initiative encouraged us to continue working in depth. In alliance with other European countries, we proposed drawing up new strategies and action lines, as well as project exchanging and raising awareness via a common platform. And to make this line of work visible, we held the 1st International Forum on Heritage Interpretation in a Gender Perspective.

The meeting, held in webinar format, has been divided into three thematic blocks: Women’s Storytelling, With a Woman’s Name, and Women’s Memory.

The first of them has collected all the European experiences that, to date, have dealt with women’s cultural heritage in the framework of the European Heritage Days, a regular event fostered by the European Council. Different initiatives have been presented (carried out in the Basque Country, in England and in Ile-de-France) promoted by public and private bodies, non-profit organizations and volunteers. The second block showed transversal projects that are being developed in Italy, Slovenia and the Basque Country, based on the profiles of women of historical, artistic or political significance. The third and last section has dealt with widely varing experiences, whose common denominator is the education, training, socialization of women’s cultural heritage. Carried out by cultural resources in Bizkaia, Navarre and Valencia, they all share the implementation of programmes in which the gender perspective plays an essential role.

This website uses cookies to improve your experience as you navigate it. These include cookies classified as essential, which are stored in your browser, because they are needed for the basic functions of this site to be operational. We also use third party cookies, which help us to analyse and comprehend how you use this site; however, these require your consent to be stored in your browser. You can also refuse these cookies; although your navigation experience maybe affected by the voluntary exclusion of some of these.

Necessary Always Enabled
Necessary cookies are absolutely essential for the website to function properly. These cookies ensure basic functionalities and security features of the website, anonymously.
Functional
Functional cookies help to perform certain functionalities like sharing the content of the website on social media platforms, collect feedbacks, and other third-party features.
Performance
Performance cookies are used to understand and analyze the key performance indexes of the website which helps in delivering a better user experience for the visitors.
Analytics
Analytical cookies are used to understand how visitors interact with the website. These cookies help provide information on metrics the number of visitors, bounce rate, traffic source, etc.
Advertisement
Advertisement cookies are used to provide visitors with relevant ads and marketing campaigns. These cookies track visitors across websites and collect information to provide customized ads.
Others
Other uncategorized cookies are those that are being analyzed and have not been classified into a category as yet.
SAVE & ACCEPT
Powered by