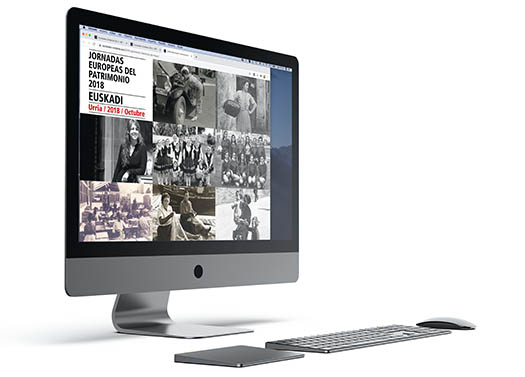 Women´s Legacy-Emakumeen Emaria came into being in Bizkaia, to coincide with European Heritage Days 2018. That year the programme focused on women’s contributions to cultural heritage, which marked a turning point in our approach to heritage.

The experience received the enthusiastic collaboration of museums, associations, local groups and institutions in the three provinces of the Basque Country. More than 500 meetings were organised between citizens and women’s cultural heritage.

We were not alone in exploring this theme: in 2018, England commemorated the centenary of women’s suffrage with the Extraordinary Women campaign run during its Heritage Open Days. Meanwhile, Ile-de-France has been running its own alternative to European Heritage Days for several years: the Journées du Matrimoine.

Based on these inspiring experiences, Women´s Legacy-Emakumeen Emaria is aiming to be a Europe-wide platform for incorporating the gender perspective into interpreting our cultural heritage.

You can present us with your project to be a part of Women’s Legacy-Emakumeen Emaria or simply contact us regarding any other matter via one of the following links:

If you would like to join Women’s Legacy-Emakumeen Emaria, please fill in this form and we will contact you.

This website uses cookies to improve your experience as you navigate it. These include cookies classified as essential, which are stored in your browser, because they are needed for the basic functions of this site to be operational. We also use third party cookies, which help us to analyse and comprehend how you use this site; however, these require your consent to be stored in your browser. You can also refuse these cookies; although your navigation experience maybe affected by the voluntary exclusion of some of these.

Necessary Always Enabled
Necessary cookies are absolutely essential for the website to function properly. These cookies ensure basic functionalities and security features of the website, anonymously.
Functional
Functional cookies help to perform certain functionalities like sharing the content of the website on social media platforms, collect feedbacks, and other third-party features.
Performance
Performance cookies are used to understand and analyze the key performance indexes of the website which helps in delivering a better user experience for the visitors.
Analytics
Analytical cookies are used to understand how visitors interact with the website. These cookies help provide information on metrics the number of visitors, bounce rate, traffic source, etc.
Advertisement
Advertisement cookies are used to provide visitors with relevant ads and marketing campaigns. These cookies track visitors across websites and collect information to provide customized ads.
Others
Other uncategorized cookies are those that are being analyzed and have not been classified into a category as yet.
SAVE & ACCEPT
Powered by